Our Awards
Our COVID Response
Our Reviews

Know This Before Paying For A Foundation Repair

Repairing foundation damage can be expensive. Unfortunately, foundation issues are common in North Texas. Most of the houses built directly in the area north of Dallas have a slab foundation. In addition, many of the areas where these houses are located have unstable soil. If the site wasn’t well prepared before the development was built, it can lead to foundation issues years after the home was constructed.

If you find yourself needing foundation repair for your slab home, then you also need to know about how this affects your home’s plumbing systems running underneath the slab. Knowing about this ahead of time will help you make the right decisions, take the right steps in the right order, and not be taken by surprise during the whole process. In this article, we’re going to give a short overview of the stages in foundation repair; discuss how this affects the plumbing; and talk about the water and sewer tests that need to be run before and after the repair.

An Overview of the Foundation Repair Process

All foundation repair jobs vary based on what is needed, but there are some steps that are generally followed throughout the process.

Sometimes, different utilities will need to be disconnected before beginning the work. A good quality company will work hard to ensure that their work is done cleanly and everything can be put back together afterwards in a neat way. Laying out tarps and transplanting landscaping is often necessary.

In order to have a solid footing under the slab to support its weight properly, piers (made of steel or concrete) need to be installed by digging underneath the perimeter or even on the interior of the home. Interior piers can be excavated by chipping a hole in the concrete. If this can be done under a carpeted area, the carpet can be put back fairly easily. If, however, the piers need to be installed under an area with tile or wood flooring, it is often necessary for a different contractor to come out and repair the flooring properly. 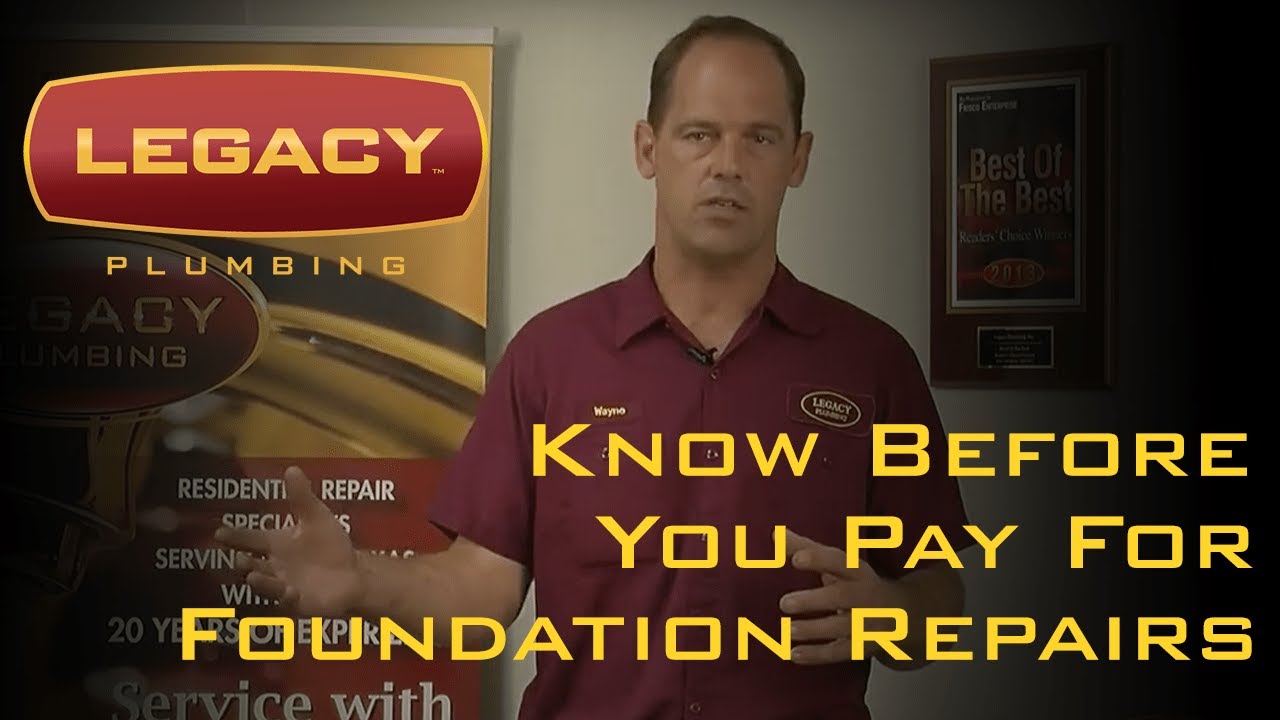 Once the piers are installed, they provide solid points underneath the slab that can be used to first lift and then support the slab at the proper elevation. They use very powerful hydraulic jacks to slowly lift the slab until it is at the right height everywhere. Once it is level and everything is back to where it should be, the jacks are removed and now the slab is permanently resting on the piers.

Filling in the Holes

The actual foundation repair is done at this point, but the holes where the piers are need to be filled back in as much as possible. The soil that was excavated earlier is packed back into the holes. 100% compaction is not possible, so there may be some left over dirt after this process. This is often piled up around the holes or along the foundation and allowed to settle naturally with time.

A good foundation contractor will do a very thorough job of cleaning up after everything is said and done. Landscaping is replanted; the soil is smoothed out. If they had to do interior piers, the inside of your home is cleaned as well. Finished flooring work or advanced landscaping will need to be done by another contractor.

And that’s it for the actual foundation company side of things. It’s not over yet, though. Next we’ll learn about what all this movement does to the plumbing.

Water under the slab is a problem. House sites must be built with proper drainage and rainwater control features like gutters and french drains to make sure the soil under the house doesn’t get too wet. When water does get under the slab, the soil will swell with a force strong enough to move foundations. In the same way, if the soil then dries out, it shrinks down bringing whatever is set on top of it down with it.

Once you understand this, it makes sense why it is so important that there are no plumbing leaks underneath the home. A leak on the potable water system of the home can put a lot of water under the slab in a hurry. But slow sewer pipe leaks can be just as damaging over time.

The pipes are installed underneath the slab and buried in dirt before the concrete is poured. Wherever there is a plumbing fixture, the pipes turn upwards and pass directly through the concrete. In other words, parts of the plumbing system are held solid in the dirt under the house and parts of the plumbing system are held in place by the concrete slab. When the slab moves relative to the soil, it is an enormous force that can tear the pipes apart.

Occasionally, the plumbing leaks first and causes the foundation to move because of the excess water. Then, this foundation movement causes more pipes to break – perpetuating the cycle of plumbing destruction.

Most of the time, it isn’t quite that dramatic. The foundation may have shifted only a little from natural soil movement and left all of the plumbing intact. If the lifting process isn’t too extensive, the plumbing might stay perfectly healthy throughout the foundation work.

There is no way to know for sure what’s going on with the plumbing without proper testing.

The two plumbing systems under the house are the potable, pressurized water supply system and the gravity-drain sewer pipe system. Both are tested differently with what we call “static tests”.

For the water static test, we need to install a pressure gauge on the system and see what pressure the water pipes currently are. Then, we need to seal off the system by shutting off the main water supply valve (usually at the meter). Once it is a sealed system, if there are any leaking pipes, dripping faucets, or running toilets, then the water pressure of the system will start to drop. The faster it drops, the more significant the leak is.

If your house does have a pressure drop, we’ll have to go through and make sure there is not any leaking above-ground at the fixtures (dripping faucets, for example). These won’t cause foundation issues, but they can potentially hide other leaks below the slab. So the leaks have to be dealt with or isolated before we can know for sure nothing is leaking under the slab.

If there are no above-ground leaks and the pressure still drops, we have to find out whether the leak(s) is on the pipes under the slab or out in the yard. The irrigation system can be isolated with the double-check valve. The water supply line buried in the yard can be isolated at the house shut off valve (usually in the flower bed near the foundation perimeter). If one of these valves doesn’t work, we may need to replace it in order to continue testing.

In this way, we can know for sure whether you have a leak on any of the water lines under the home.

The same basic principles apply to testing the sewer system of the home for leaks. All of the sewer lines under the home join together and exit the perimeter of the foundation as a single, large pipe. Wherever this pipe leaves the footprint of the structure, there is an access point called a cleanout that can be opened up. This is where we test.

We use an inflatable rubber ball to temporarily seal off this main pipe so that no water can flow out to the city sewer system. In this way, we create a sealed system of sorts. Instead of pressurizing it, though, we simply run enough water to fill all of the pipes under the house with water. The water level will get higher and higher until it reaches the top of the cleanouts and is at least at ground level. Then, we shut off the water.

Since none of it can flow out to the city sewer and is in a sealed system, the water level should remain constant and not get any lower. If there is a leak anywhere on the piping under the slab, then water will start leaving the system and the water level will start to drop. The faster it drops, the bigger the leak is.

Once it has been confirmed that there is a leak on the system, finding it is usually more time consuming. It involves using a special sewer camera and the rubber test balls at different access points. The rubber balls are moved throughout the system, strategically sealing off different sections until the leaking spot is narrowed down.

We’ve covered a lot in this article. First, we talked about what to expect from the foundation company by giving a rough overview of their process for lifting a home and repairing the foundation. Next, we talked about the relationship between the plumbing systems of the home and any movement that happens to the slab. Finally, we looked at the different tests that are done to find out if plumbing under the home is leaking.

Hopefully this is helpful to you in your foundation repair journey. If we can help out more, just give us a call! We can go over your situation in more detail and answer any questions you might have.

Hot Water is an essential part of your daily routine, from showering to cooking, we rely on our water heaters to function correctly day and night. When your hot water starts to run cold or your water heater tank is leaking or just needs to be replaced, call Legacy Plumbing.
Learn More

Toilet FAQ’s from a Plumber

Get Our Insights In Your Inbox
PrevPreviousIs My Yard Leak Coming from the Sprinkler Line or Plumbing System?
NextHow to Fix a Slab Leak: The Top Four WaysNext

How to Find a Leak Under the Kitchen Sink

If you’ve opened up your kitchen cabinet and found soggy paper towels or drops of water on your cleaning supplies, …

Warning Signs of a Slab Leak Do you suspect a slab leak? Maybe you’ve heard a quiet hissing sound coming …

How to Fix a Slab Leak: The Top Four Ways

Do you have a high water bill? Do you hear a faint hissing sound like water running in the wall …

Tips from the Experts

Is My Yard Leak Coming from the Sprinkler Line or Plumbing System?